The slot begins with an introduction clip which is set in New York City's Times Square. It has a Wild and Scatter icons, Free Spin feature and an intriguing Bonus Round.

The game icons on this exciting video slot include a Baby, which is the Wild, Old Father Time, which is the Scatter, the Champagne as the bonus and the New Year's Ball as the Jackpot icon. Other paying icons featured in the video slot include a New Year's Hat, a Girl in Club, and a Guy in Club, Steak, a Trumpet, a Lime Drink, Toast and a Taxi Cab.

A special feature of this video slot is the Bonus feature called the Reel Party Platinum bonus. During this round players must pop the cork of three out of the twelve high-value bottles of champagne to win rewards.

Reel Party Platinum is a luxurious slot to play and contains colourful high quality graphics and exotic icons on the reels. It also has pleasant background music, lively animations and extensive features that allow players to have hours of endless entertainment. 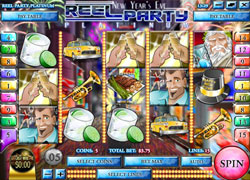 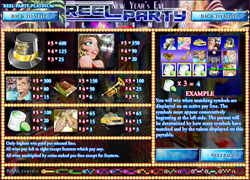 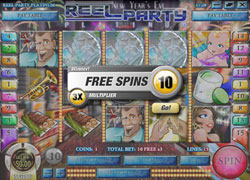