Join the cartoon alien Astronauts on a journey around the galaxy on an official mission. The planets look just as alien but they hold the secret to the big rewards! The unique clear-cut and colourful 3D graphics bring the game to life.

The big Blue 'Wild' will substitute for all other symbols to form winning combinations. It can also appear Stacked on the reels.

The Scatters feature is triggered with any winning spin which awards a free re-spin.

There are 3 Levels and this is how it works for any subsequent wins:

Should any of those Scatter symbols appear on reels 3, 4 or 5 their value gets multiplied by the number of times that symbol is in view, including the Wilds.

During any regular spins, Giant Planets could land at random on the 3rd, 4th, and 5th reel.

This symbol takes up 3 entire reels in a 3x3 grid acting as a Wild. 5 of a kind winning combinations can be awarded.

The Auto Play option can be set up to spin the reels for consecutive spins without interruption.

Stars Awakening is an intriguing slot with the spinning planets and exciting rewards after each successful spin. 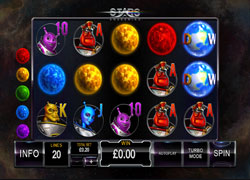 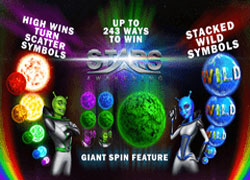 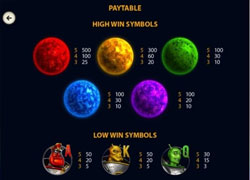